Last night my 2 year old daughter came across a TRS-80 in our basement that my grandfather had given me, and she started banging away on the keys. I decided to plug it in and switch it on for her so she could get some feedback. I’d never turned it on before… but it worked! Well, kind of…

First it came up with a message that just said:

I figured that must mean “Cassette” and there was none, so I just pressed N and hit enter. Then it said:

The front panel said 48K, so I dutifully typed 48 and pressed enter. It didn’t seem to like the answer, or indeed anything else I tried to type in. When I got the computer there was a pile of books with it, and this one was on the top: 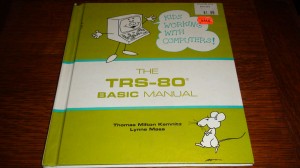 Helpfully, the first thing it tells you to do is to just hit enter when it asks you that question. I did, and after a couple thoughtful seconds, it gave me the good old “ready” prompt:

The book suggesting typing CLS to clear the screen. I did this, but the L key didn’t work. I tried again. Nope…

Ok, so now it was a challenge. Isn’t it interesting that this old boat anchor could pass the time calmly in my basement when I thought there was nothing wrong with it, but the moment it needs repair, it becomes the focus of attention. I brought it up to the dining room table and started taking it apart (interestingly, my wife came home after it was sitting there disassembled, and it didn’t even phase her… apparently having the guts of a computer sprawled over the dining room table no longer provokes even the slightest surprise).

Amazingly, the “warranty void if removed” sticker was still intact over one of the screws. It felt good to void the warranty on an almost 30 year old computer. Once I got it apart, it wasn’t too hard to see what the problem was:

In case you didn’t quite catch that, here’s a close-up:

Yes, somewhere in this computer’s previous life, an industrious little rodent managed to build a nest under the lower floppy drive bay, and thoughtfully chewed through a few of the wires in the ribbon cable connecting the keyboard to the main board. After vacuuming it out I started searching for a suitable replacement. I took an unused IDE ribbon cable from my Windows Home Server. The TRS-80 ribbon cable had 20 pins, and the IDE cable had many more, but about 5 of the wires were “twisted” on the IDE cable. I had to carefully take it apart, untwist the wires, and put it back together. Then I was able to replace the keyboard cable with the new one, powered it up, and it worked!

I hunted through the other documentation that came with it, and thought I’d share the nostalgia: 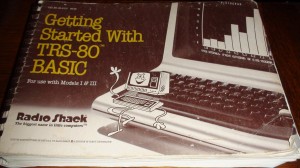 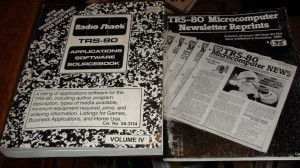 The one on the bottom left is particularly interesting. It’s literally a catalog the size of a Sears catalog, filled cover to cover with programs you could buy via mail order (anywhere from a couple of dollars to many thousands). It’s indexed by author, by industry, by application type, etc.

I never had a TRS-80 before, but I had an Atari 800XL, which was also programmed in BASIC (old school, with line numbers). It brought back many memories. I hope I could provide a moment of nostalgia for some of you too.

Now to figure out how to hook this up to something… 🙂