In a ControlLogix (or CompactLogix) processor, your logic is divided into tasks, which are then divided into programs. These terms will be very familiar to you if you have a good understanding of real time operating systems, but might be confusing to you if you just graduated from a SLC 500.

When you look at your controller organizer tree, you’ll see a Tasks folder that looks like this by default:

RSLogix 5000 has already created a continuous task called MainTask for you. Note the little circular arrow on MainTask – that means it’s a continuous task. Inside MainTask, it’s created a program called MainProgram, and it has one ladder logic routine called MainRoutine inside. It also has a place for program specific tags. These are tags that are only visible to logic inside of this program.

Programs are the main way to organize your project on a macro level. If you were programming an assembly line with 5 cells, it would make sense to put the logic for each cell into its own program. Likewise, if you were just programming a single cell with 5 stations, it would make sense to put each station into its own program. This is a decision you have to make based on your own needs. It’s also normal to move non-control logic, like communications, HMI interfacing, mapping inputs, and mode selection into their own programs so they don’t clutter the control logic.

Let’s start by changing the name of “MainProgram” to our first program, “MapInputs”. Right click on the MainProgram and select Properties from the context menu: 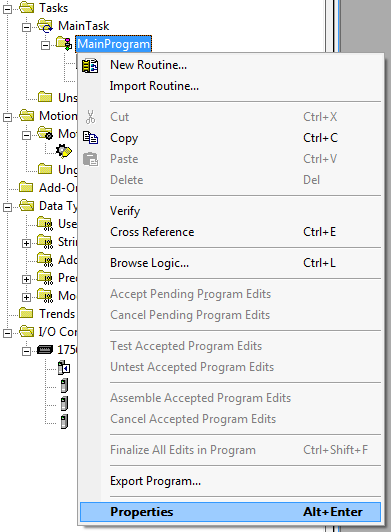 That will display the Program Properties dialog box. You can edit the name here (highlighted below). Change it to “MapInputs”, then click OK: 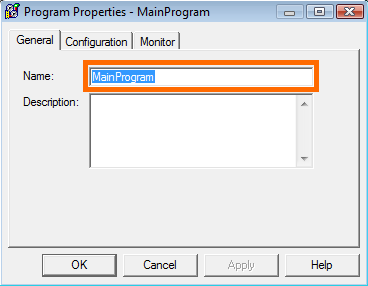 Once you’ve clicked OK, you’ll see the program name has changed in the controller organizer:

Now we want to add the following other programs to this task: “Faults”, “Global”, and “WashingMachine”. Let’s start by adding “Faults”. Right click on MainTask, and click New Program…: 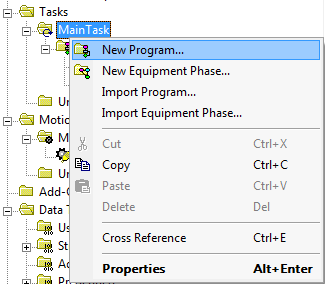 That will display the New Program Dialog. Enter the name Faults in the Name field, and click OK: 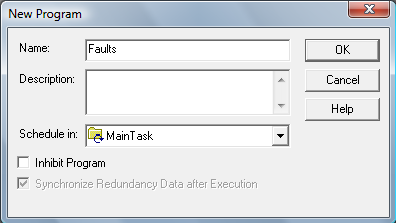 Repeat the same process for two more new programs: Global and WashingMachine. When you’ve finished, you should see this in your controller organizer: 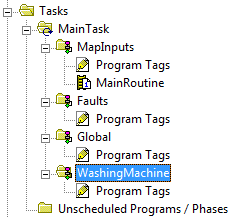 That’s all there is to adding programs. I’d like to show you one more thing before we move on to laying out the routines: you can rearrange the programs within a task, or even remove or add programs to a task. Start by right clicking in MainTask in the controller organizer and clicking Properties: 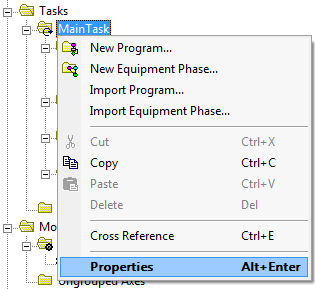 That will open the Task Properties Dialog. Click on the Program/Phase Schedule tab (highlighted at the top of the image below): 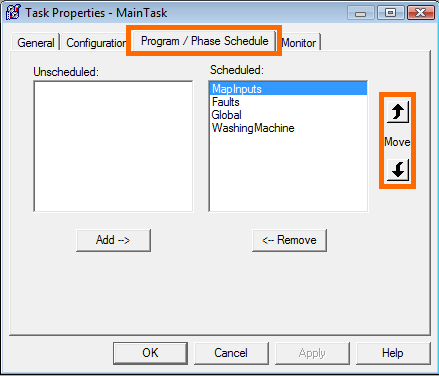 The listbox on the right is the list of programs that are assigned to the task. You can select programs in this light and use the Move up and down arrows (highlighted) to change the order in which the programs are executed inside this continuous task. The programs will show up in the controller organizer in this same order (which is intuitive).

You can also remove programs from execution using the Remove button below the listbox. This is a useful feature, for instance, if you want to disable execution of the MapInputs routine while you’re bench-testing the program without real I/O attached. Then you can just toggle your input bits and watch the program execute.

In the next part of the tutorial, we’re going to get into how to layout routines in a logical way within each program.