There’s a lot of stuff that falls under the term “functional programming,” but I’m just going to focus on the “functional” part right now, meaning when you define the value of something as a function of something else.

In ladder logic, we define the values of internal state (internal coils or registers) and outputs. We define these as functions of the inputs and internal state. We call each function a “rung”, and one rung might look like this: 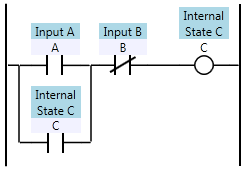 Each time we scan, we redefine the value of C. That means C is an infinite time-series of true/false values. Huh?

Ok, imagine an array of true/false (boolean) values called “C”. The lower bound on the array index is zero, but the upper bound is infinite. C[0] is false (the value when we start the program). Then we start scan number 1, and we get to the rung above, and the PLC is really solving for is this: 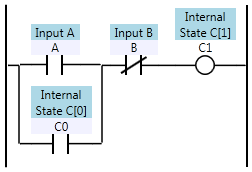 If that were actually true (if it had an infinite array to store each coil’s value), then the ladder logic would be a truly functional programming language. But it’s not. Consider this:

In all modern PLCs, the first rung overwrites the value of C, so the second rung effectively uses the newly computed value for C when evaluating D. That means D[1] is defined as being equal to C[1] (the current state value of C). Why is this weird? Consider this: 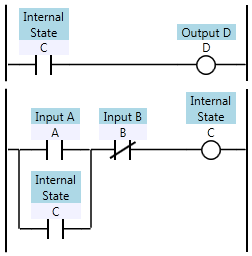 By reversing the order of the rungs, I’ve changed the definition of D. After the re-ordering, D is now defined as C[0] (the previous state value of C) rather than C[1]. This isn’t a trivial difference. In an older PLC your scan time can be in the hundreds of milliseconds, so the D output can react noticeably slower in this case.

In a truly functional language, the re-ordering either wouldn’t be allowed (you can’t define D, which depends on C, before you define C) or the compiler would be able to determine the dependencies and re-order the evaluation so that C is evaluated before D. It would likely complain if it found a circular dependency between C and D, even though a PLC wouldn’t care about circular dependencies.

There are a few of reasons why PLCs are implemented like this. First, it saves memory. We would have to double our memory requirements if we always wanted to keep the last state and the next state around at the same time. Secondly, it’s easier to understand and troubleshoot. Not only does the PLC avoid keeping around two copies of each coil, but the programmer only has to worry about one value of each coil at any given point in the program. Third, the PLC runtime implementation is much simpler. It can be (and is) compiled to a kind of assembly language that can run efficiently on single threaded CPUs, which were the only CPUs available until recently.

On the other hand, we can still enforce a functional programming paradigm in our ladder logic programs if we follow these rules:

That means there should only be one destructive write to any single memory location in your program. (It’s acceptable to use Set/Reset or a group of Move instructions that write to the same memory location as long as they’re on the same or adjacent rungs).

It also means that if coil C is defined on rung 5, then rungs 1 through 4 shouldn’t contain any contacts of coil C. This is the harder rule to follow. If you find you want to reference a coil before it’s defined, ask yourself if your logic couldn’t be re-organized to make it flow better.

While ladder logic isn’t a truly functional language, you can write ladder logic programs in the functional programming paradigm. If you do, you’ll find that your outputs react faster, and your programs are easier to understand and troubleshoot.