A couple of years ago we moved into a nice new home, and like most new homes it had a shiny new HRV.Â  I had never seen one before, and I was impressed by the idea that it exchanged stale inside air with fresh outside air but it conserves the energy you’ve already invested in heating or cooling the inside of your home.Â  I actually pulled the cover off to study how it worked, and pulled the cover off the furnace to see how it was hooked in.

The HRV draws air from the bathrooms, kitchen and laundry areas in the house (because they are your sources of moisture) and exhausts that air outside, but brings in an equal amount of air.Â  Rather than distributing the incoming air back into the house itself, the HRV dumps it into the furnace airflow, and sends a signal to the furnace to run whenever the HRV is on.

When we received the keys to our home, the builder instructed us to leave the HRV on at its lowest level 24 hours a day to prevent humidity, particularly at the beginning as the home is wet from construction and you need to let it dry out.Â  Makes sense.Â  After about a year though, I had this idea that running the furnace fan 24/7 at full speed just because the HRV was running at its lowest speed probably wasn’t the most energy efficient setup, particularly since the HRV itself is supposed to be an energy saving device.Â  After doing a bit of research, I discovered the manufacturer of our HRV made something called a Lifestyles Controller.Â  This is basically just like a programmable thermostat, but it controls your HRV.Â  You can program it to start and stop at different times of the day, operate in different modes and at different speeds depending on the need, etc.Â  Great! 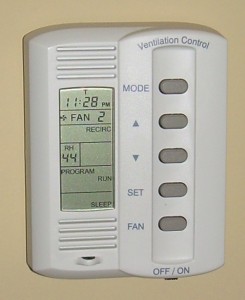 My odyssey started when I attempted to purchase this marvel of technology.Â  The manufacturer wouldn’t sell me one because I needed to go through an authorized distributor, and of course there was only one in my area.Â  I contacted them and they’d never heard of this device.Â  I gave them the part number and they had to get back to me.Â  When they called me back, they asked me why I wanted to buy it, and acted like this was a huge inconvenience for them (imagine, a customer calls you and wants to buy something).Â  That should have been my first clue of the dangers to come.Â  I insisted that I wanted to buy one, and yes, I’m quite capable of installing it myself, and yes, I understand it’s a special order item and there are no returns.Â  Did I mention it was expensive too?

When I went to pick it up at the distributor, they were very careful to tell me that I must unplug the HRV before installing this or else I could easily short out the power supply.Â  I don’t mean they told me this once or put a note on the package to remind me, but several people made it really clear not to do anything with it plugged in.Â  Makes sense.Â  I’m used to rewiring stuff and I always turn the power off.Â  Again, this was a sign, and I didn’t heed it.

I got the device home, unpacked it and set to work installing it making sure to unplug the HRV first.Â  The instructions were very simple and easy to understand.Â  I didn’t bother running wires through walls at this point; I just wired it up about 3 feet away from the HRV (my history in automation has taught me to avoid commitment).Â  When I finished wiring, I plugged the HRV back in, the lifestyles controller powered up, and… wouldn’t control the HRV.Â  I followed the instructions to the letter and just couldn’t get it to ever start the HRV even with the button that just manually starts the HRV on a timer.Â  I tried a couple of other ideas, like disconnecting the existing bathroom control pads, etc. (unplugging it every time!), but nothing seemed to work.Â  I dreaded the next obvious step.

I called the distributor.Â  “The lifestyles controller for my HRV doesn’t work.”

“Did you install it without unplugging the HRV?”

You can imagine the rest of that conversation.Â  Nothing surprising.Â  They asked me to call the manufacturer and talk to their tech support.Â  Again, “Did you install it without unplugging the HRV?”Â  Grrr.

The manufacturer told me I had to take it back to the distributor who would return it to them, which was quite funny since all three of us were located in the same city!Â  Anyway, here I am back in the distributor’s office, and the woman behind the counter takes a look at the device, bewildered, looks at my receipt and says, “This is a special order item.Â  There are no returns.”

“I don’t want to return it.Â  I just want one that works.”

They did send it back and lo and behold, there was nothing wrong with the device.

“They tested it and there’s nothing wrong with it.Â  However, it’s only compatible with HRV firmwares after October 2006.Â  When did you purchase your HRV?”

“We got the house in September of 2006.”Â  At least that made sense.Â  Maybe we were getting somewhere.

“The manufacturer has offered to provide an upgraded controller board free of charge, but it’s not something you can install yourself.Â  We’ll have to come and install it, and our hourly rate is blah and there’s a minimum charge of blah.”Â  (I can’t remember the exact price, and I’d probably just get angry if I did.)

At that point I figured, if I’m paying a minimum charge anyway, why not have them come and install the whole thing, and get it put in the right spot, run the wires, etc.Â  Great.Â  Wait, it gets better.

Buddy comes to install the gadget.Â  He’s got the new controller board, and gets that installed pretty quickly, but when he asks me where I want the controller, I tell him I want it right beside the existing programmable thermostat, in the hall upstairs.Â  He takes a walk around, takes a look from the basement, turns to me and tells me he didn’t bring a ladder with him.Â  No problem, I say, I have a couple in the garage, and it’s not terribly surprising that he wouldn’t have a ladder anyway.Â  Wait, it gets better.

He also had to borrow my drill, and an electrical fish to get the wire through the wall.Â  Wait, it gets better.

“What gauge wire do you figure this needs?” he says.

You’re asking me?Â  I have to take a day off work to pay you hundreds of dollars to borrow my tools to install a product you sell and you’re asking me what gauge of wire you need?Â  Wait… it gets better.

“I didn’t bring any wire with me.”

“No problem,” I say.Â  “I’ve got a whole whack of telephone cable in the garage, and it’s at least the gauge of wire that the rest of the HRV communication uses, so it should be fine.”

So we set to work running the wire.Â  Just to put the icing on the cake, when we go to punch the hole in the drywall where the controller is going to be mounted, we discover there’s a plywood blocker just behind the drywall in that spot.Â  I grab the drill, put a spade bit in it, and drill an inch diameter hole through the plywood.Â  Then I discover there’s another wire back there… interesting.Â  I just drilled through it actually… I wonder what that belongs to.Â  It turns out that was the wire that goes to the glass break detector on the security system.Â  Had to fix that too, but that was my fault.

We got the whole thing installed and wow!Â  It worked!Â  Buddy gave me a discount for having to use my tools, and I was a happy geek, programming my HRV.

That is, until a few months later when I noticed the humidity in the house was through the roof.Â  The controller was still “on”, but it was obvious it had stopped controlling the HRV.Â  I’m not sure what caused it to fail, but thankfully it was still under warranty.Â  I got it replaced.Â  The one I got back works.Â  I’m holding my breath…

That’s my latest foray into home automation, and I’m not impressed.Â  In my job in industrial automation, I can actually install and program the industrial controllers myself, and when I talk to the distributors and manufacturers, nobody treats me like a moron.Â  Home automation is still in its infancy, so the only people doing this themselves are generally early adopters like myself: technical and geeky.Â  Treating us like this is completely counter-productive.Â  I hope some company, somewhere, steps up to the plate and starts working with us, not against us.

2 thoughts on “Automating the Home, Failed”